Sky Is the Limit for Former Police Officer-turned-Vaccination Site Manager.

Kirsty, a former Police Inspector, worked for Hampshire Police for over 30 years (30 years and 10 months to be precise!), completing her service and retiring in June 2020. All Kirsty knew was the Force – joining up when she was just 19 years old – but upon completion of her thirty years, decided that she was still a long way from a proper ‘retirement’.

“I had thought I could just focus on my Triathlon training. Maybe an Ironman and just enjoy the rest in between. But I soon realised I liked all my policing skills and wanted to keep using them, so I contacted Richard Rowland at X-Emergency Services.”

“When I was thinking about leaving the service, I was really concerned because there’s that feeling of being ‘institutionalised’; I hadn’t known anything else. I had never had to apply for any other job. I had no need to see what the rest of the workplace outside of Policing looked like, so to think of going off and doing something else, or with people other than police officers and police staff, I thought it was going to be a bit of a challenge.”

X-ES supported Kirsty throughout her transition journey from the Police, from CV writing and interview techniques, to LinkedIn job applications and connecting Kirsty with contacts from a broad range of industries and hiring sectors. 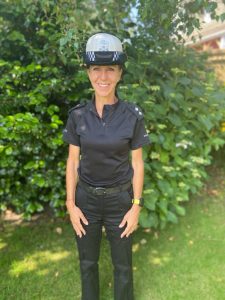 “I met with Richard from X-ES. He was really reassuring and explained to me the skills and abilities I had from policing were totally transferrable to other roles. X-ES secured me an interview for a managers role with Amazon (which they offered to me!).

Richard also suggested volunteering, so I now volunteer for Police Care, and I sit on their grants panel. I also got a job as a marshal at a vaccine centre, and after just two months they invited me to apply to the site manager’s job. They described me as a ‘gem that doesn’t come along very often’. I interviewed for that, and I now run a vaccine centre. I also crew for an events company, which is fantastic!”

Kirsty, who is now a part of multiple organisations, encourages others in a similar situation to get involved with as many professional opportunities as possible – experiment and find a new role that suits you and the skills you gained from your time serving.

“Without X-ES and Richard’s support I wouldn’t have had the confidence to realise my potential in any of these areas. We are so flexible for having worked in the police, with such a diverse range of job responsibilities, when you go and work outside the police you realise, actually, you can do it, and it’s actually really exciting!”

“It’s been a spectacular start to my ‘retirement’ so far. Roll on the next adventure that may come my way.”

Inspired by this story?

X-Emergency Services (X-ES) is a Community Interest Company that supports the emergency services community through transition, whether that be second or third careers, employed or self-employed, volunteering or retirement. X-ES specialises in nurturing entrepreneurial and intrapreneurial ambition and is the UK’s largest provider of transition support to the ex-emergency services in business. Support is available to leavers, those who have served and their immediate family members. X-ES works with the government’s Start Up Loans scheme, run by the British Business Bank. We support beneficiaries through a full package of training, finance, networking and mentoring. Start your journey by registering today here.